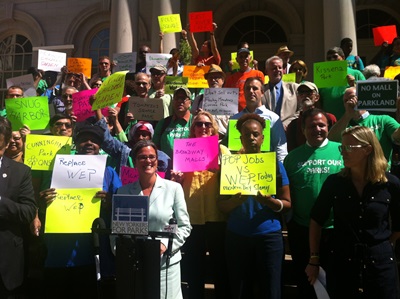 Executive Director Holly Leicht’s last day with New Yorkers for Parks was January 10.  She has been appointed by U.S. Department of Housing and Urban Development (HUD) Secretary Shaun Donovan to serve as Regional Administrator of HUD Region II, which comprises New York and New Jersey. In her new role, Leicht will be instrumental in carrying out ongoing Hurricane Sandy recovery efforts.

Last month I had a chance to talk with Holly about public private partnerships in New York, the new mayor and the work of New Yorkers for Parks.  I’m glad I did as her new job will take her far beyond park boundaries and the work of the more than 100-year old New Yorkers for Parks (NY4P).  Founded in 1908 because there were not enough resources for children’s play in the city, it’s only been within the last two decades that research to substantiate advocacy has become an important part of what they do.

Around the time that the Bloomberg administration took office in 2002 the former Parks Council took on its new name and broader mission.  “But,” says Holly, “one issue that has crossed our 100 years is that we are a watchdog on alienation issues – protecting parkland all the way back to the Moses era.  We work to maintain the ‘public’ in public parks.”

Holly arrived at NY4P in 2011 just as NY4P was solidifying its reputation for airtight research and reporting on the city’s parks– essentially creating a database that now supports the efforts of both citizen advocates and elected officials.

“Because we’ve collected and analyzed data on the same issues across a number of years now, more people look for and rely on it,” says Holly.  “We’ve refined our methodologies, are doing multiple reports and doing them better.”

The Parks Department agrees.  NY4P’s Report Cards on Parks are the oldest product.  In addition, they do District Profiles every 4-5 years in which all 51 council districts in the city are compared for park space per capita, information that city council members and community boards are eager to have.

And thirdly, NY4P does an Open Space Index (OSI) – “a really deep dive” into a neighborhood’s open space resources using both GIS and ground-truthing.  All three reports are really useful for community advocates and elected officials, as well as Parks Department staff. It was in Jackson Heights that their district profile led the local advocates and council members to commission an OSI that was then used to leverage city efforts to acquire new open spaces and improve existing ones. 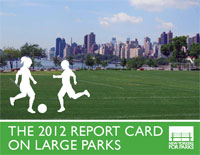 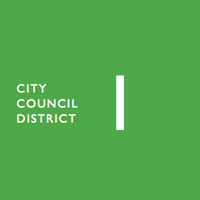 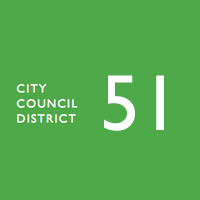 Media campaigns and outreach around the reports help bring attention to underserved parks, but Holly says, “There is just not enough funding, especially on the maintenance side, to go around.  There is a definite pattern – where the report card highlights ‘fires’ the Parks Department moves to put them out – but that means resources are being pulled from somewhere else.  In 2013, we looked at the same large parks we rated in 2011 – some of the worst from 2011 improved, but others were worse. We call it the Whack-a-Mole problem. The pie is simply not big enough. We’ve come to see the need for addressing this issue more comprehensively.”

In 2001, the Parks Council changed its name to New Yorkers for Parks to emphasize the organization’s growing focus on advocacy work.  Their platform during that year’s mayoral campaign was based on securing 1% of the city budget for parks – and it caught fire.   In the end, Bloomberg was the one candidate who didn’t commit to the 1% for parks campaign – and then 9/11 happened, throwing the economy into a tailspin. When the 1% goal wasn’t met, there was no fallback plan for engaging with the new administration.

“We learned that we needed a more robust, long term strategy for shaping park policy. Candidates engage at a fairly high level during election campaigns; there has to be more depth once an administration is in place and looking to actually govern.  In preparing for the recent election – which seated the first new mayor in 12 years – we saw a need to develop a multi-pronged platform that laid out viable solutions to the most substantive and complex park issues, so that when the election was over, we already had a set of 10 goals that the new mayor and Parks Commissioner could adopt in whole or part and start implementing. We wanted to start talking about the meatiest issues well before the election, so that by the time a new administration was in place, these issues would already be part of the public dialogue and would resonate.”

Last spring, NY4P developed a draft ten-point platform and held a town hall meeting with over 100 advocates and facilitated workshops to vet and revise the platform.  Over the summer, they met with elected officials and every community boards who expressed interest; they had public meetings in every borough; met with all the mayoral candidates or their representatives except one; and did lots of outreach through the press, social media, and the NY4P website and newsletter.

“All our outreach drove people to a petition where they could endorse the platform, and hundreds of individuals and organizations signed on,” says Holly. “There was not a lot of discussion about parks among the mayoral candidates, but we got local advocates and park groups and the press to talk about what we were talking about. We viewed it as a marathon, not a sprint. Now we have a new mayor and are awaiting a new Parks Commissioner – and we are poised, along with our many platform supporters, to start a much more sophisticated conversation with the administration right out of the gate than had we not started engaging on these issues almost a year ago.”

“For example, we want the new administration to look at the capital budget and the way that capital funding is allocated – how it affects what projects get funded and the speed of project completion. Wonky stuff, but it needed to rise to the top.  We’re seeing traction on that issue now, whereas when I first started talking about the capital allocations, I’d get blank stares.  We transformed our platform into a transition memo with the most salient points from the platform: five recommendations for the new mayor that would create a more equitable park system.  We feel prepared to hit the ground running with the new Parks Commissioner.”