This blog continues from last week on the work of New Yorkers for Parks and public private partnerships, gathered through an interview with outgoing Executive Director Holly Leicht.

In 2012 NY4P undertook a detailed analysis of the growing number of private park conservancies in New York City, closely scrutinizing the 25 legal agreements between conservancies and the Parks Department.  The result was a set of recommendations to encourage greater consistency, transparency and accountability in public private partnerships.  The report found that partnerships are indeed augmenting the public budget – which will never be what we would like it to be – but that the city needs to do a better job tracking funds and should require more consistent financial reporting that is made public on the Parks Department’s website.

“There’s no question that these organizations are value added to the parks they’re working in,” Holly told me, “but we also found that there was value added to the whole system since other parks benefit from freed-up public money – but the Parks Department does not quantify this dollar value.  It’s evident private money is making Central Park work, for example, but we have no real data to prove the benefit at the neighborhood park level.”

“The public shouldn’t have to filter through 25 Form 990s to find out the budgets of these public private organizations.  Let’s develop a simple reporting template that shows what’s coming in to the partners and how are they spending it, and put this on the Parks Department website annually. There is a common misperception that these groups are bringing in tons of money, but with a couple exceptions, we found that most groups are doing good work operating on relatively tight margins.”

NY4P found that more public transparency and more consistency about how the department works with each group could dispel many misconceptions – but with 25 conservancies and the number growing, what about best practices and alignment of how the city works with them?  Couldn’t there be a simpler template for creating the partnerships?

“We had our intern develop a matrix comparing the terms of all of these agreements. He came back with a tome – about 25 pieces of paper taped together that covered most of my office!  There was so little consistency among them. They all developed under different circumstances and were negotiated with the Parks Department without a standard framework. What we found made us see the value of creating a consistent template to unify them more going forward, without sacrificing necessary flexibility to tailor them to specific parks. These partnerships are still a relatively new model, and a lot have been started only in the last 10 years.  It’s time to look at what we’ve learned during this period and pick out the best elements to replicate and serve as the foundation for a more consistent template.”

The inclination always is to rush to get everything memorialized but if you go too fast you won’t learn – letting things play out a bit so you can see how the relationship will work is usually better. Like Central Park Conservancy, Prospect Park Alliance, Pittsburgh Parks Conservancy and other early examples, seeing what happens in practice before you lock people in usually turns out to be a pretty good idea. 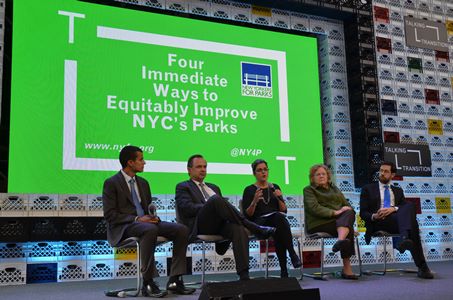 Mayor DiBlasio has made park equity an important issue and has proposed to effectively tax the most profitable nonprofits in order to provide revenue to parks with smaller or no private support.  NY4P has followed this issue closely and does not think this approach is the answer.

“We have real concerns about this idea at multiple levels,” says Holly.  “First, it’s a misconception that this would raise a lot of money for underserved parks. Focusing on public private partnerships as the source of inequity has diverted the discussion from how we are allocating our public dollars across the system. That’s the biggest problem.  Only 7 conservancies are big enough to qualify for the proposed tax on their budgets, and even supporters acknowledge it would generate at most $10-12 million annually. That’s hardly going to address inequitable conditions among 1900 park properties. The Parks Department capital budget is about $350 million, and its expense budget – much of which goes toward maintenance personnel – is close to the same amount. How we spend that money is the game changer.”

The Bloomberg administration invested a huge amount of capital dollars in parks, but much of that funding went into a small number of large, destination park projects.  NY4P advocates giving the same amount of funding to the Parks Department to spread across the park system in a more equitable way, focusing on those most in need.  “If the new administration commits to keeping this robust budget but spending it differently by empowering the department to target the lowest performing parks, you will see inequitable conditions addressed in relatively short order,” says Holly.

The New Yorker blogged on this issue, agreeing that some kind of new funding is needed to reach parks not now being reached by private funding but it saw the shortcoming of taking from the wealthier parks:  “It pins its egalitarian hopes on a reallocation of private resources, rather than a more progressive scheme of taxation that would leave the city with fuller coffers to channel toward all the city’s parks.”  Could the new Mayor help to lead an effort to increase parks funding?

“NY4P will do everything we can to try and promote this message,” Holly says. “We honed our 10 points to 5 that focus on real causes and real solutions. Taxing the large conservancies is a token gesture, not a substantive solution.  People in underserved neighborhoods aren’t looking for symbolism; they are looking for meaningful, game-changing solutions.  It is not that complicated to get more funding in a lot more parks.”

In New York here’s how the budget works.  There are two budgets – capital and expense (which is mostly personnel).   The capital budget has been healthy under Bloomberg – but it’s not discretionary for the department.  The way that the budget has evolved is that the department gets mayoral funding for specific projects – about 1/3 of its budget is earmarked for large projects like Governors Island, Brooklyn Bridge Park, and the High Line.

Over a second 1/3 of their budget comes from discretionary allocations given by individual City Council members. Almost all small neighborhood park projects are funded by Council member allocations.  The Parks Department has to in essence lobby elected officials to fund these projects, politicizing the process and sucking up staff time to work with electeds to try to align their priorities with department priorities.  Council members do not all receive equal funding, and even the luckier ones do not receive enough typically to cover an entire project in a single year, so budgeting for a park project often takes multiple budget cycles.

“It takes a long time and is hardest on lower income neighborhoods which tend to have a lot more demands for Council members’ funding. We don’t necessarily need more dollars on the capital side – but we have to rethink the current reliance on City Council discretionary funds, which leads to inefficient and inequitable outcomes,” says Holly.

NY4P has raised the level of the conversation in New York in a way that has lessons for parks across the country.  It did so by gathering the facts, fighting misconceptions and reaching out to park users in every council district in the city.  So now, when the organization speaks, it does so with knowledge and credibility.  I asked Holly what lessons can be taken away for other cities.  Here’s what she said.

“First, we are really sold on the value and benefit of using public private partnerships to make the parks budget go further. But the Parks Department should know the cost to maintain every city park, as well as the amount of public and private funding that supports each.

“Secondly, transparency is critical.  It is important for the Parks Department to show that private money is augmenting the budget – not displacing it.  The department needs to set a standard for financial reporting and transparency.  We would be better off had we been doing that from the start.  It holds the conservancies accountable, and we can identify and replicate best practices.

“Sharing best practices is another important lesson; the more that private partners and conservancies talk to each other – within and between cities – the more their experiences can be shared. We’re really at a place where we don’t need to be inventing a new model every time a new partnership is launched.

“The last thing we’ve learned is that the public private partnership model particularly benefits larger and more resource-intensive parks. Big parks have so many different features, stakeholders and even diverse topography – they are hardest to maintain and struggle the most if they don’t have a way to augment their public funding. I’m not sure in today’s budget climate it would be possible for Central Park or Prospect Park to look the way they do without their private partners.”