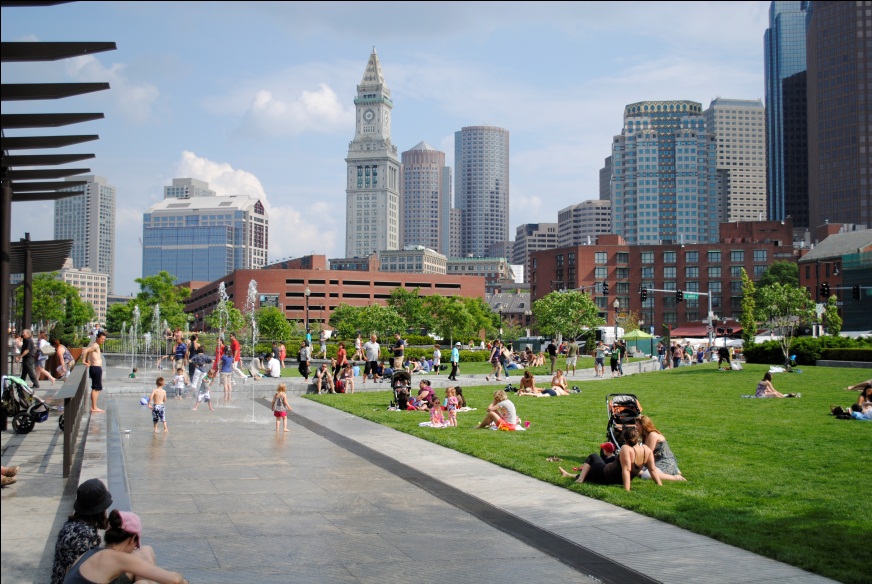 The Rose Kennedy Greenway in downtown Boston sits on land created from the Big Dig, a megaproject in Boston that rerouted the Central Artery (Interstate 93), the chief highway through the heart of the city, into a 3.5-mile tunnel. 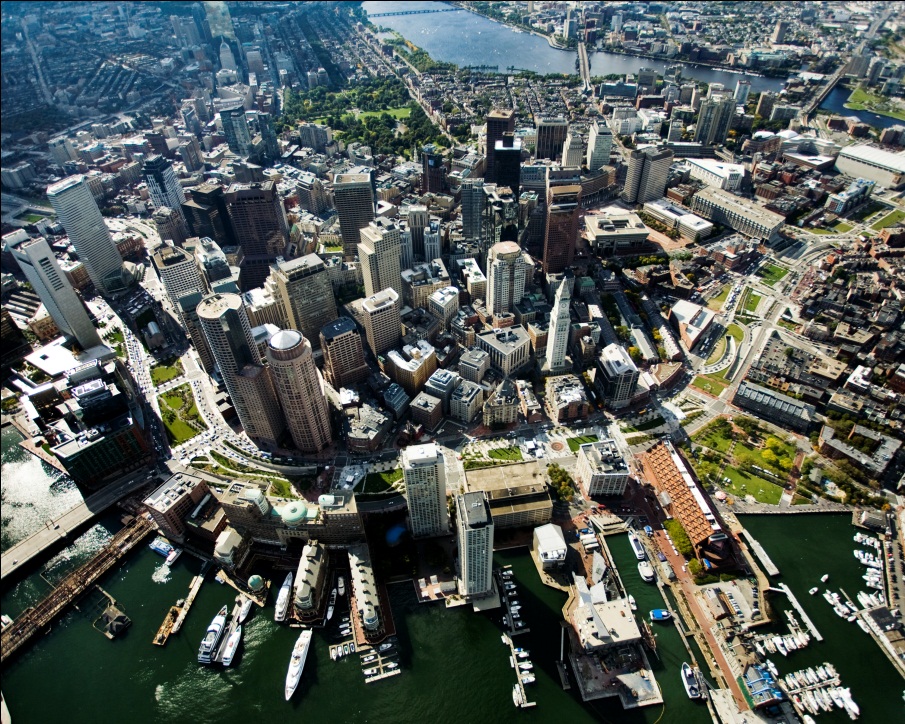 According to Wikipedia, the Big Dig was the most expensive highway project in the U.S. and was plagued by escalating costs, scheduling overruns, leaks, design flaws, charges of poor execution and use of substandard materials, criminal arrests, and even one death. The Rose Fitzgerald Kennedy Greenway – a roughly 1.5-mile-long series of parks and public spaces – was one of the final parts of the project completed after Interstate 93 was put underground: an amazing creation of park space in a highly dense city born out of one of the most controversial infrastructure projects the city has ever seen. The Greenway is named after Rose Fitzgerald Kennedy, the matriarch of the Kennedy Family who was born in the neighboring North End neighborhood.

The Conservancy of the same name was created in 2004 with an agreement between the state of Massachusetts, the City of Boston and the Kennedy family to manage the Greenway. In 2008, legislation established the non-profit Rose Kennedy Greenway Conservancy as the official steward of the Greenway and by early 2009 they undertook operation of the site.

The Conservancy leases the Greenway from the Massachusetts Department of Transportation (MassDOT) and is responsible for maintenance, horticulture, programming, and fundraising. The State committed to providing half of the annual budget and the Conservancy the other half. Between 2004 and 2008 the Conservancy raised $20 million in endowment and other funds.

Already you can see that this is an unusual partnership that includes not just the city and the Conservancy working together but a third partnership with MassDOT, a transportation agency – not a parks agency – that provides partial funding for the Greenway; the City provides no funding for the Greenway, although the Mayor is a big champion of the project. All of this is complicated by the fact that MassDOT was only formed itself in 2009 with a merger of the former state entities, MassHighway and the Massachusetts Turnpike Authority along with four additional new divisions. The merger includes a fair amount of mission change and leadership changes, including a new board of directors. I’m guessing the MassDOT board members chosen were picked for MassDOT’s core mission, rather than urban parks experience.

The Conservancy is the first one of its kind in Boston and in some ways critical to the site’s success since MassDOT has little experience with managing city parks. There are friends groups – and one Business Improvement District that is only two years old – but this is the first P3 for parks in the city. Jesse Brackenbury, the Chief Operating Officer (and currently the acting Executive Director) says, “I used to work for the New York City Parks Department. They’ve been doing park partnerships longer than everyone else. But the idea of a private conservancy managing a public park is still a new idea here in Boston.”

Starting a new kind of park partnership in the middle of the recession, and following on the checkered history of the Big Dig has offered its challenges. In some ways the city has embraced the Conservancy, which has done very well in fundraising and drawing users to the park with its extensive programs. In other ways the city is struggling to understand how the partnership will work, especially with an agency that has no parks mission. According to Jesse,

“We have a good relationship with MassDOT. We understand how unusual it is for a highway agency to be working on parks – it’s not their core mission and not their expertise. They have huge challenges ahead outside the Greenway. But in the last year we have worked together to create a deeper understanding of the fiscal needs of the park and how it works. Their staff has learned about costs and management responsibility for the Greenway. They now understand how the Conservancy delivers value on cost effectiveness and fundraising.”

Rose Kennedy Greenway is more than just another neighborhood park. It was set up by the Commonwealth so it is a state park not a city park. It runs from Chinatown to the Financial District to the Wharf District to the North End neighborhoods – two residential neighborhoods, a commercial/office area and a tourist area. The Conservancy has a lot of different constituencies to serve and to balance and they try to manage parts of the park differently to respect the different populations along the way.

Not unlike the High Line, in which an elevated Greenway traverses one mile through Manhattan’s lower west side, spurring increases in property value and new real estate development along the line, the Rose Kennedy Greenway has the potential to do the same in Boston – and it is very much a goal of the City. The Boston Redevelopment Agency is creating development guidelines for the new Greenway District that will guide new development. Already, through the creation of the new Innovation District across the channel, some of the most significant development in Boston is a direct result of the highway coming down.

The Conservancy as a Leader

When you’re first out of the box, scrutiny and expectations are high regarding your performance and it’s no different for the Conservancy. They have to meet their mission and do it really well. And they welcome the challenge. In 2012 they completed a five-year business plan – an attempt to propose a way forward with their partners in the 3-legged stool. The business plan is a proposal for how the budget can become sustainable and they chose carefully in making their recommendations. As Jesse says, “These are ideas that are tried and true; they’re more workable than something untried and unproven.” 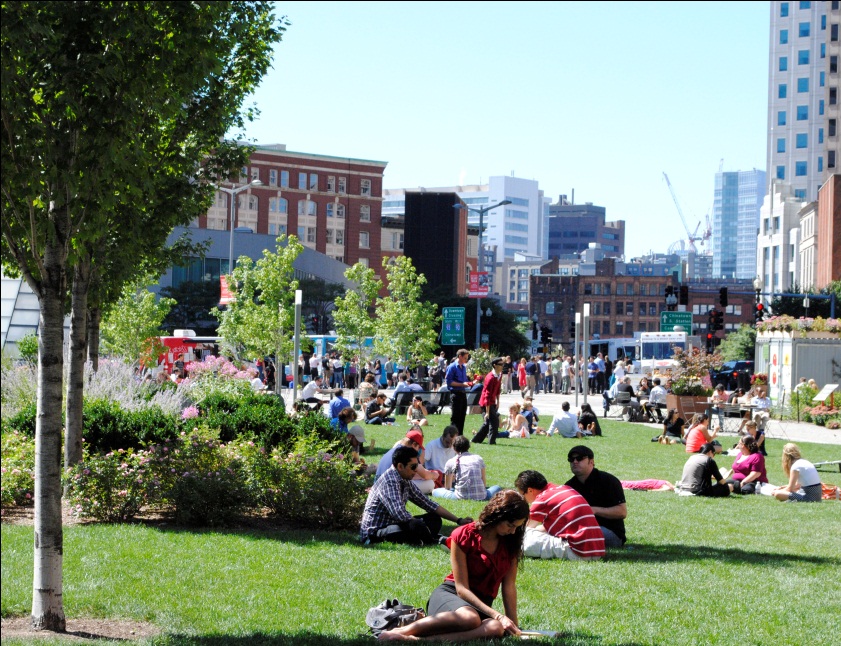 One of the ideas for supporting the work of the Conservancy is another BID, though the idea is on the backburner for now until their new lease is signed with MassDOT. The area’s commercial owners understand that their future is tied up in the Greenway and they are keenly interested in making the Greenway work. But they want to make sure that their dollars won’t substitute for the state’s funding. They want a true three-legged stool with the state, a BID and the Conservancy.

The one existing BID in Boston – the Downtown Boston BID, or Downtown Crossing – was created to help an area that had become run down. It was meant to bring it back. The Conservancy’s hope with the Greenway is that a BID can help before park is deteriorated. “We want to look forward and see the need and make the right decision now,” says Jesse.

The Conservancy’s earned income comes from two sources right now – income from the carousel on the site and their food vending program. Early in discussions about how the park could run there was apprehension and concern about privatization in the parks. But this discussion only served to create a clearer focus on park amenities that could earn income with the carousel and food vending being two ways that all could agree on.

The carousel currently operates with a concession agreement worth about $75,000 to the Conservancy. Multiple recent major gifts, along with a grant from the Massachusetts Cultural Council, will allow the current carousel to be replaced with a new one that highlights Boston heritage.

The new carousel and plan for operations should double the net earned income to the Conservancy. They will move from being renters to being owners of the carousel. “This has been such a fun project for us,” says Jesse. “It’s the right thing to do for our mission. We’ve engaged school kids and local artists to design and carve the animals, and have designed the carousel in a way that will allow use by the disabled, too.” 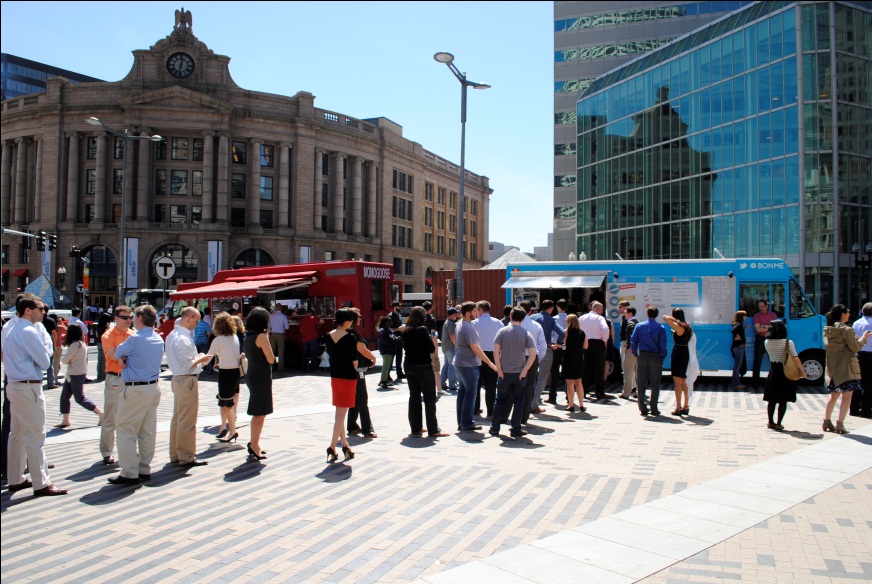 The second source of income for the Conservancy is their Greenway Mobile Eats program. In 2010 food vending brought in $26,000 toward their budget. Contracts being signed now should result in more than $260,000 in revenue in 2013. Their efforts have been the subject of widespread acclaim on both national and local news as well as creating long lines during lunchtime.

One thing that the food vending and carousel programs have enabled is an easier way to do customer counts – tracking attendance to the Greenway via the vendors and food trucks.

Counting users in a linear park is complicated. There are no entry places and no fences. So the Conservancy does a few different things – they get reports from food vendors and the carousel operators. Secondly, they installed a Wi-Fi network and they measure unique log-ins. And thirdly, they measure attendance at their events – just over 300 in 2012. Attendance in the Greenway is up from 2011 by 66%. 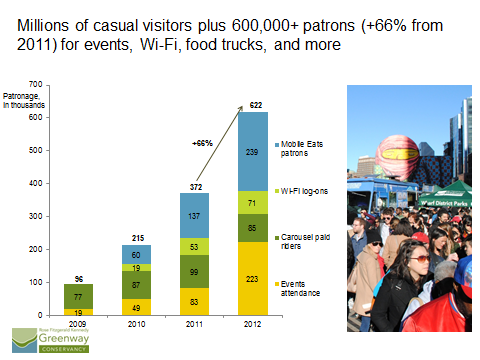 Now that they understand more about whose coming and when, they’re trying to find ways to enliven and activate other parts of the Greenway. From Jesse, “For three years during the season we have taken photos from six different locations in the park four times a week. We chose locations where we knew we were making investments to attract people, e.g., new tables and chairs. We didn’t take pictures of the most crowded and already visited places. We wanted to know whether we were getting results from the investments we were making.”

Sustainability as a principle also extends from the budget to the landscape and the Conservancy is committed to maintaining all of the Greenway organically. They’ve learned a lot from their friends at Battery Park City in New York – “a real innovator” – and worked with them to learn their methodology. Recently they worked with a team from the Harvard Kennedy School to review their protocol – could they be more efficient? After a cost comparison of the organic approach and what would be a non-organic approach they found that the organic approach was less expensive.

“It’s the right thing to do. Mothers can feel comfortable having their babies run across the lawns safely and it is cost-effective. It’s a win-win-win,” says Jesse.

The Rose Kennedy Greenway Conservancy is less than ten years old – half the age of similar P3’s in Pittsburgh, Philadelphia, New York or even Missoula, Montana – and so they are just hitting their stride. They are slowly turning this empty ribbon of green into one of the city’s best meeting places and winning over their toughest critics. In 2008, Tom Keane of the Boston Globe called the Greenway the “…world’s most expensive median strip.” Today he raves about it, saying, “…the parks are now meeting places, common ground between neighborhoods, and destinations in and of themselves. The Greenway is a roaring success.” That’s a lot of change in four years.