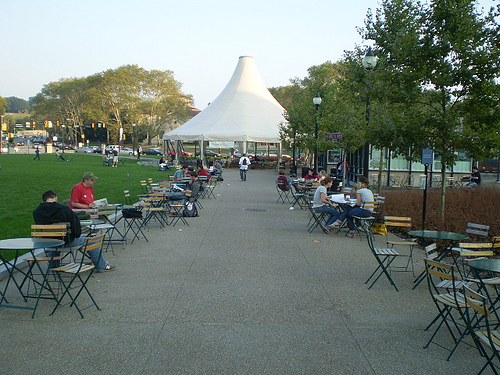 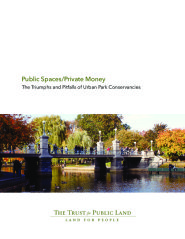 Peter Harnik at The Trust for Public Land has once again added to the foundation of knowledge about city parks with a new report issued by the Trust’s Center for City Park Excellence. “Public Spaces/Private Money: The Triumphs and Pitfalls of Urban Park Conservancies” is a report by Harnik and Abby Martin that looks at 41 organizations from around the nation that are partnering with public agencies to plan, design, operate and manage city parks.

Starting with the ‘roots’ of the conservancy movement in New York and San Francisco, the report provides a good overview and much data about the growing number of park conservancies. Most conversations about the history of park conservancies start with the formation of the Central Park Conservancy in 1980 but Harnik and Martin’s report enlightens the discussion with what was happening on the west coast with the creation of the Golden Gate National Park Conservancy at roughly the same time in 1981.

Since then, the idea of park partners has taken hold in cities around the country – almost 50% of major cities have at least one conservancy. Harnik and Martin’s report looks at 41 of these organizations who in 2012, collectively spent $158 million dollars on operations and capital construction. As Lindy Eichenbaum Lent, director of Denver’s Civic Center Conservancy says in the report, “Conservancies exist because the projects they’re working on are really difficult.”

Up until recently, management of city parks was most often the purview of public agencies. It is only in the last twenty years that varying models of partnerships – with other public agencies, nonprofits and for-profit corporations have become more common. According to Paul Eagles (2008), the Canadian planner and academic at the University of Waterloo, not only is park management changing but so is the governance of them – which determines the effectiveness of management. The framework of new partners in governance is what is driving many of the changes in how our parks are operated and programmed.

Public Spaces/Private Money cites the value that private partnerships and their resources have brought to parks but also cites the growing concerns around equity and the possibility of displacement of public agency resources and responsibility. The report provides recommendations to minimizing both issues by being deliberate in working in partnership, including developing formal agreements and park master plans, as well as defining clear roles and responsibilities for public officials and for the leadership of the conservancy.

The relationship between a well-connected and passionate board of directors and city officials is crucial to a good partnership. Quoting from the report, “Participation by public officials reaffirms to volunteer board members that their work is important and appreciated …and guarantees that the public interest will be represented while protecting the board from “privatization” accusations.”

At least much of the time. Many of the early conservancies are finding that as their capabilities and performance success has grown so has the call for them to do more, in some cases taking responsibility for planning, capital improvements, and as much as 85% of daily maintenance as is the case for the Piedmont Park Conservancy in Atlanta. To do so well, many conservancies are mindful of a third partner in their efforts – the community of surrounding residents and users of the park – and are creating mechanisms to engage and keep them at the table.

“We made the mistake of relying on our board members or allied community members to disseminate ideas. It wasn’t enough to counter suspicions that we were privatizing the park,” cites one conservancy director in the report. Many directors interviewed for the report say that programming the parks as much as anything allows for more outreach and more engagement and more assurance that the park stays true to its public values.

Six case studies illustrate the creation and growth of conservancies in cities around the country with data and stories about how they are responding to challenges that vary from building new parks, renovating old ones and operating, managing and programming them to serve growing numbers of users. But interspersed in the report are multiple lessons from conservancy directors and public agency officials that underline the fact that these partnerships are an ongoing project. Having twenty or thirty years of experience is terrific but as circumstances change – elected officials and founding board members move on, for example, and higher park use demands more frequent restoration – the tips from these leaders are all the more valuable.

The work of the Center for City Park Excellence and the City Parks Alliance will be front and center at the City Parks Alliance’s upcoming Greater and Greener 2015 Conference on April 11-14 in San Francisco. This is truly a not-to-miss conference for urban park leaders, city officials, planners, designers, architects and advocates who believe in the power of parks and are working in partnership to make them more resilient and vibrant.

Two workshops will occur at the conference that focus on park partnerships – one for new partnerships that will focus on how to get started; and a second, which I’ll be moderating, on leveraging and sustaining partnerships during fundraising, especially capital campaigns. Both panels will be filled with some of the best and most experienced park partners in the field – many of whom are featured in Public Spaces/Private Money. So don’t waste any time in getting registered. Between the panel sessions, field trips and networking you’re likely to get every penny back – and then some – on your registration fees in the learning that will go on. And pick up a copy of the new report before you go for reading on your plane trip!

All photos are from CPA except for report cover from TPL.