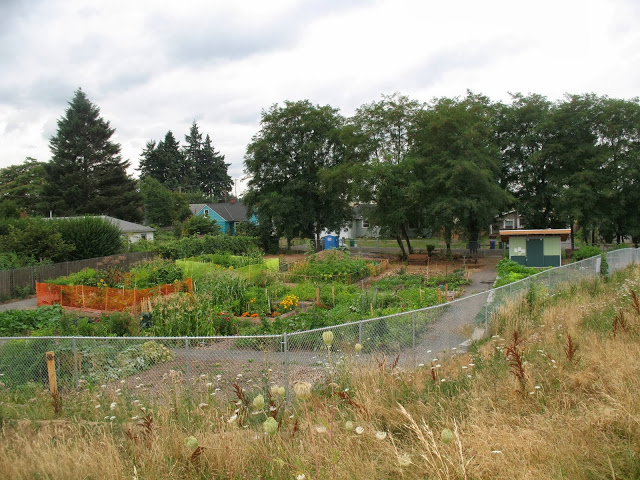 For over twenty years, Cully neighborhood residents set their sights on the conversion of a 25-acre grassy field in the neighborhood, well-located and large enough for a range of community activities – even if it happened to be the site of a former landfill.

Tony DeFalco, Coordinator for Let Us Build Cully Park! (LUBCP!) recalls, “The community wanted it badly enough to figure out a way to build it. You had 25 acres, active methane collection and multiple partners involved in managing the site. We knew we needed to raise capital to organize a working coalition.” 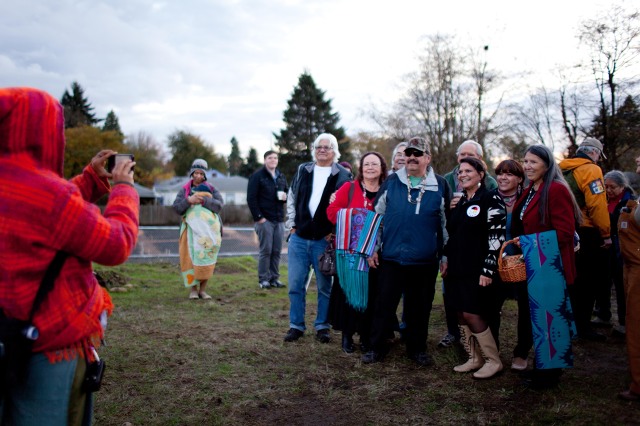 Verde, a non-profit dedicated to building wealth in low-income communities has been working with residents of Cully Park but as early as 1996, residents and the Cully Association of Neighbors negotiated with the Mayor for a parks masterplan. In 2010, Verde spearheaded development of the Let Us Build Cully Park! (LUBCP!) Coalition which was formed with the help of a $150,000 grant from the Northwest Health Foundation. Their coalition included sixteen other organizations to maintain the community’s presence with municipal, environmental and public health agencies through the redevelopment process for the site.

Members of the coalition served as connections to communities living near the park, including youth, Latinos, Somalis, low-income people, low-income housing providers, tribal people, longtime neighborhood residents, and newcomers to the neighborhood. For the first time in Portland, local residents were involved during the actual sampling of soil at a brownfield site.

“Partnerships were borne out of necessity,” says Tony. “The first ones were with Oregon Department of Environmental Quality (DEQ) and the Oregon Health Authority. We needed health and safety to be the primary consideration – we had to get past the distrust and show that the issues around health and safety were being addressed – as well as efforts toward building a park.”

The park site is surrounded by a mix of uses. On three sides are light industrial uses and a rail line; another side is residential and another is a major street. The area is a mish-mash, poorly planned and not easy to access thanks to poor sidewalks, limited legal access and a lack of transit. Related to building the park are efforts to work with surrounding business owners and residents to build safe ways to get there.

So how do you attract partners and engage the community to convert a former landfill site – that’s not very accessible – into a park?

“The easy part has been responding to strong desire, said Tony. “People were inspired to be involved. They had a vision for what the site could be. The grant helped community development corporations pay for staff time to engage their constituencies in the park planning process. The Native American youth group, for example, got involved around the proposed playground and tribal garden. LUBCP! created the capacity to be the lead partner on the community side.”

The park is being built under a ‘design-build’ contract which has allowed the local coalition to engage local, women-owned and minority businesses to develop the site. When designed and built the park will be turned over to the city for management and maintenance – with some co-management for at least the tribal gathering garden. The agreement made through the Portland Parks Foundation is the first the city has done with tribal people.

“This park is part of an anti-displacement strategy,” said Tony. “Park creation often leads to gentrification and displacement. We want to control as much as possible the investments coming into this neighborhood. This park is part of a series of investments in the neighborhood – housing, job creation and green infrastructure – called “Living Cully.” We’re delivering needed assets in a way that puts money into the pockets of people in the community.”

The community garden is open to people who have garden plots but the full park is not officially open yet. Expected to open in the Fall of 2015 it will create a public space for 775 families in the area. 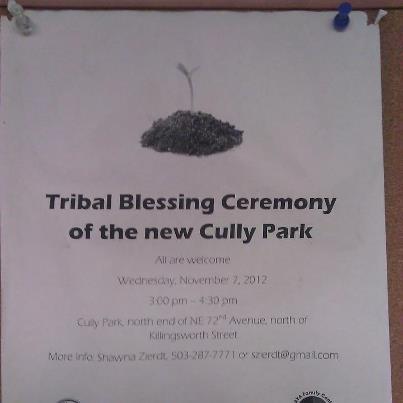 Encouraging this level of community leadership took work on both the part of the neighborhood and the city as well as the state health and environmental organizations. The community’s ability to articulate its need and vision for the park, personalize the issue and mobilize large groups of residents to help lead the process captured the attention of the public agencies including the parks department. Success thus far has been resident-driven but maintaining that resident engagement will be challenging.

“We haven’t completely answered the question of programming,” said Tony. “Our fall back is that the parks department will manage the site and co-manage the Inter-Tribal Gathering Garden. Our current group meets every two months with agency partners to work on a variety of issues around the park.”

While financial resources are a key factor in sustainability, it takes more than money to sustain community park partnerships. One upside to the Cully Park project is that the public agencies involved were encouraged by the success of the collaboration. If the coalition can maintain its leadership role in the park project, they can help to manage, program and sustain park operations. Maybe one outcome of this success story is that the park department uses this experience as a springboard for developing technical assistance resources to help more neighborhood partners. Supporting community-based leadership can only help both sustain their success in their overlapping mission.