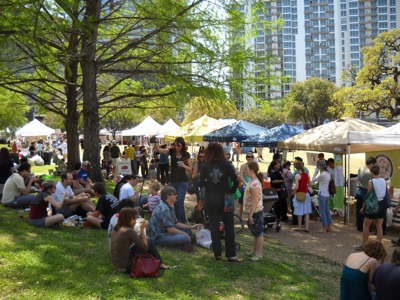 The Central Park Conservancy manages 843 acres. Prospect Park Alliance partners with the city to oversee 585 acres. And the Pittsburgh Parks Conservancy stewards over 1700 acres with its parks department. On the other hand, Sister Cities Park in Philadelphia is less than five acres. And Republic Square in Austin is less than two acres.

The big parks have large conservancies that focus on the enormity of their job. But many of the smaller downtown parks tend to work in partnership with their neighbors much more aggressively leveraging their amenities together. In many cases, like Sister Cities Park, a small downtown park is managed not by a parks conservancy but by a Business Improvement District (BID) or a downtown association. In fact, there are a large number of parks not managed by their own conservancy but by downtown associations who have seen the value of parks – the living room of the city – in leveraging a vibrant downtown.

A good example of this is in Missoula, Montana where the Missoula Downtown Association (MDA) manages the riverfront-based Caras Park. In 1986 the Parks Department introduced “Out to Lunch,” a downtown weekly lunchtime festival at Caras Park, featuring musicians and today, over 20 varied food vendors. It became clear after the first year of the program that Park and Recreation was not well suited to producing large events like Out to Lunch because of limited staff resources. In response, the Missoula Downtown Association took over the program and has produced it for more than 20 years – along with currently 75 other annual events. 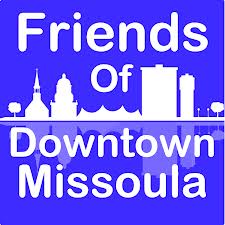 “We look at the park in a way that it adds to making the whole downtown successful,” says Melanie Brock, Acting Director at the MDA which began an extension of a committee that started within the Chamber in the 1970s. They grew and became more ambitious with the success of their weekly “out to lunch” program, taking on not just the park but a whole roster of downtown issues. But the park remains central to what they do.

Caras Park was enhanced and developed by the MDA in four phases over the last 25 years. First seating and an events ring were created; then, creation of a brick plaza area. Phase three created a formal park entrance and parking lots along the riverfront. The fourth and final phase provided restrooms and storage.

The first tent on the site was purchased from a traveling circus show in the early 1980s. The permanent Caras Park Pavilion was constructed in 1997. That structure cost $600,000 with $280,000 of that cost covered by tax increment financing. More than $300,000 was raised and borrowed by the Missoula Downtown Association to complete the project. 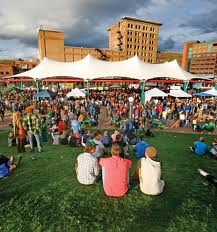 Since 1997, the City of Missoula has contracted with the Missoula Downtown Association to manage and lease the facilities for both public and private events. Rental fees pay for park operations. The MDA may take the lead on the park’s management and events, in partnership with the city Parks and Recreation Department, but there are a handful of organizations that work closely on a vision for the downtown that builds on that activity center.

MDA partnered with the Missoula Redevelopment Agency (MRA) to originally develop the park site and the MRA retains a seat on the Downtown Association board; they are currently in a partnership to raise money to refurbish the park. The Business Improvement District (BID), housed in the MDA offices, also keeps a seat on the MDA board, as does the Missoula Parking Commission and the Missoula Urban Transportation District. “Everybody plays together really well,” says Rod Austin, Director of Operations for the BID.

In 2009, they jointly paid for a masterplan in 2009 that lays out a development plan for the downtown, including the park, for the next 20 years – along with 57 businesses, individuals and organizations that contributed financially to the creation of the plan.

“Anyone can rent the facility,” says Brock. “For large events we created a Caras Park Committee run out of Parks and Recreation that includes all the key neighborhood councils.” The committee meets annually to review the events schedule – in particular the extraordinary events, events likely to attract more than a few thousand people. They work out a schedule, deal with issues like noise, go over rules and develop a plan for the year.” 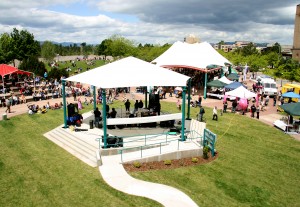 “People recognize this park as a pretty dynamically run place. We work together on almost everything. There is complete synergy in our downtown. We have something unique in Missoula – how everyone works together. We’re pretty fortunate to have such a compatible team,” says Brock.

Almost all successful downtown vitality strategies require the community to make the downtown more pedestrian-friendly, give the downtown a strong sense of place and program it with activity that invites visitation every day of the week. But how to do that is the question. All plans fail without a management strategy – what one blogger in talking about smart growth implementation calls, “…the software of the process: the personal leadership role of staff, advocates and elected officials.”

Missoula takes this idea of a team approach to its best incarnation – they provide a way to integrate the park into the planning and programming of downtown housing, commercial activity, transportation and infrastructure. The park becomes one more venue – and a public one – for getting people into the city. Then they invite downtown leaders who are investing in the downtown to be part of the park’s governance and management.

This idea of integrating a public park into the fabric of downtown is not a new one. Hundreds of downtown parks and plazas can be spotted across the country. But many are littered, homes for the homeless and have long since lost their visionary beginnings. So what keeps a park from turning into a no-man’s land? Generally, a failure to provide resources and a plan for governance and management after the ribbon gets cut.

Last week the City Parks Alliance Blog provided a link to a story about Austin’s plans to revive its Republic Plaza downtown. “What is there now has a ‘leftover’ feeling to it; it was not designed for the intense use that park sees today,” said Marty Stump, a project management supervisor in the parks department.

It sounds like Austin now has a vision for the park that involves programming it both for events and as an everyday place for residents and downtown workers. Parks advocates say they expect Republic Square to become more popular as the downtown grows with new condo, hotel and retail projects in the works. Hopefully new downtown plan will make management of the park clear including who will be taking the responsibility for ensuring the outcomes in this new place-making vision?