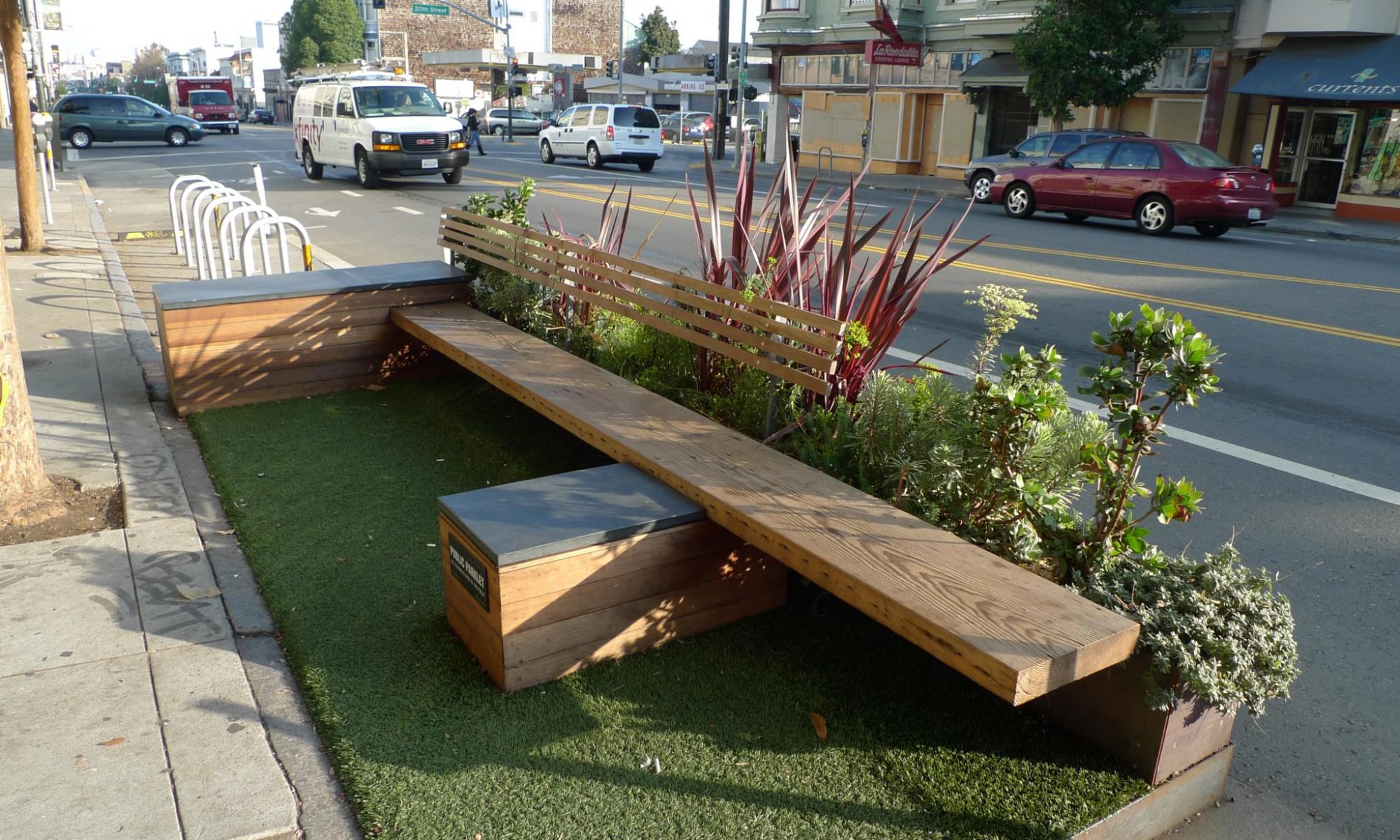 Place management is defined by the Institute of Place Management as “a coordinated, area-based, multi-stakeholder approach to improve locations, harnessing the skills, experiences and resources of those in the private, public and voluntary sectors”. However, as a conceptual field it remains relatively underdeveloped because of its infancy. –Wikipedia

Try Googling ‘public parks’ versus ‘public spaces.’ Then do the same search on YouTube and see what you get.

When you Google “public space” or “public realm” the results are rich with ideas about walkability, social diversity, design, programming and hundreds of observations on what makes a great public space and how to get there.  You also see that the ‘owners’ of these results – papers, videos, conferences, case studies, etc. – are not city park agencies and that, even the words,  ‘city park’ or ‘public park,’ are secondary – if mentioned at all – to the larger focus on streets, sidewalks and heretofore unused public and private city spaces.

With city planners increasingly focused on walkable places and downtowns we are witnessing a huge interest in the quality of public spaces. The redevelopment of these non-park public spaces – streets, plazas, parking lots, alleys, street medians and areas around transit stations – into places where people can sit, stroll, linger and be entertained is producing a robust discussion about how to develop, design and manage them.

A closer look at who is doing the development and management of these new public spaces shows that it is mostly not city park departments.  It is other public agencies like convention center authorities (Lawn on D Street in Boston), transportation agencies (Chicago Make Way for People), public works departments (San Francisco Parklets) and design and management consultants.

Or, it is developers and real estate professionals who increasingly see public space as being critical to the quality of life package that makes their new projects competitive.

In their plans and promotion you see a new body of language that distinguishes between place-making and place-keeping and place management with an understanding of the need for site management strategies to ensure successful places.

In practice, park professionals know that creating good public spaces, including public parks, is complex. Processes that transform these spaces are not steered by good design or artful programming alone.

These hybrid forms of public parks are emerging with more complex partnerships, lease arrangements, special districts and other tools that pilot shared roles and responsibilities for developing and managing – and funding – these new spaces.

So, why isn’t all this energy, funding and attention regarding the value of public space also embracing public parks?  My Google search on public parks gave me search results that mostly included citations for individual city park agencies or they showed sites with information on making the case for public parks – a case that public space projects presume with their greater focus on design and management.  It took a lot more searching to find more interesting public park discussions about innovation in management, programming and funding.

Why is there an abundance of robust experimentation and discussion by other public agencies and private developers about public spaces?  Are cities not receptive to new kinds of leadership and stakeholder participation for their parks?  And if not, how can city park agencies become more flexible ‘place-keepers’ to allow more innovation in public parks as other city agencies and private stakeholders appear to be in developing other public spaces?

Historically, cities have seen public parks – their creation and maintenance – as a protected public amenity, free and available for a mix of passive and active recreation.  But even though in most cases, public funding for city parks has increased it has not nearly been enough to keep pace with inflation, increased visitation and mandates for new programs.  The result has been a dramatic and on-going budget shortfall that make parks far less likely to be on the cutting edge in design, programming and even basic maintenance.

And, in practice, while local governments fiercely protect public parks from too much privatization, they are generally more willing to innovate around “flagship place-making projects” that are seen as opportunities for increasing the attractiveness of a city for investors.

Sadly, this willingness to innovate around management and funding for non-park public spaces means parks remain on the life-support of limited public funding.  But if we distinguish park ownership – and the importance of its roots in democratic public space – from its management, or ‘place-keeping,’ you have the potential to open up a whole new set of players and processes that collaboratively might keep pace better with public expectations.

One critical conversation surrounding the creation of both public spaces and public parks is about the lack of stakeholder involvement – the inclusion of neighbors, park users, non-profits and community organizations who can give a place a cultural connection, regular programs and users, and a secure place in the minds of the community connected to it. Increasing densities in cities means that public parks play a huge role in the lives of people who live there – especially so for underserved and immigrant families.

We know that successful place-keeping – or park management – is a multi-stakeholder effort that must be sustained with adequate funding and community engagement. But without a clear path for inviting and implementing new ideas and managing that process public parks are doomed to survive on the little they receive in the annual city budget allocation and the oversight of retro park commissions affecting to act in the public interest but more often, not acting at all.

Despite years of studies and reports, city park departments have mostly not achieved the kind of vitality needed to respond to the breadth, diversity and demands of park users.  One way to enliven their work is by creating a more rigorous process for engagement and innovation that allows for more vitality and relevance for public parks and that makes public parks the leading creative public spaces.

Who better than public park professionals to be leaders in public space management – professionals who understand that the users and stakeholders in public parks and public spaces are critical to their innovation and productivity? What place-making and place-keeping discussions have reminded us is that the impact of higher density around public spaces means a more rigorous management strategy is needed for their success and that no single entity has the resources or the competences to act alone in their management.