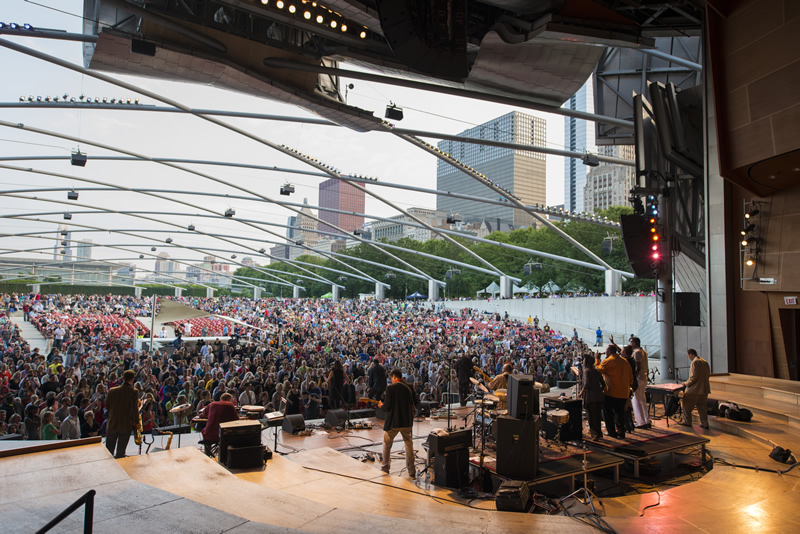 Nobody goes there anymore. It’s too crowded.

Summertime in our city parks means preparing for the millions of visitors expected looking for a place to spread their picnic blanket, toss a Frisbee and walk the dog.  The popularity of parks – city and national – is soaring, especially as the weather warms.  In Chicago, Mayor Rahm Emmanuel announced a few weeks ago that Millennium Park has become the most visited destination in the Midwest, hosting 12.9 million visitors in the second half of 2016.

But for every local resident looking for a lazy day at the park there is increasingly a tourist heading to the park to attend a summer music, art or food festival.   In the last few years the hosting of large public events in our prized parks has generated an active discussion about the type and scale of such events, their effects on other uses and users, and their role in funding parks. Local park users don’t like being shut out of the parks by the price of a ticket. And city park departments don’t like leaving them out – but nor do they like leaving money on the table when their public budgets are stretched thin.

The trouble is, too many people are converging on too few places:  Too much trash, too noisy, and too much turf and tree damage. Is there such a thing as parks being too busy?

Miami’s Bayfront Park has hosted events for 100 years but in the last decade downtown Miami has doubled its population.  Hosting over 160,000 visitors from over 60 countries at the Ultra Music festival this year in March, for example, meant the park was closed for five weeks.   Ultra is not an event that many who live or work downtown look forward to – many leave town that weekend. But total operating costs for both Bayfront – and Museum Park next to it – totaled almost $6 million in FY 2014-15. Much of that operating revenue comes from large ticketed park events since the city provides the park with no funding.

Austin park goer’s willingness to give up much of their free access to Zilker Park for a month each year has netted the parks $20 million over the last ten years.

As the Tour de Fat morphs from a bicycling parade to a music festival, Denver is moving the 2017 event from City Park to the National Western Complex; the city also put the kibosh on a second marijuana celebration in historic Cheeseman Park in April of this year after local residents said the hordes would be “…disrespectful to the historic park and the neighborhood.”

Piedmont Park in Atlanta hosts over 80% of the city’s festivals to help raise the over $3 million of operating funds. Even smaller cities like Traverse City, Michigan a few years ago reduced the number of events in its parks after suffering from “festival fatigue.”

If there’s one thing these big events have in common, it’s that they appeal primarily to out-of-towners. The hottest park destinations, like Millennium Park, are swarming with tourists.

Tourism is now one of the fastest growing sectors in a city’s economy and special events in parks, streets and public plazas have become one of tourism’s most important ways to attract visitors to a city. Check out TripAdvisor and you’ll see that city parks are increasingly ending up on America’s top lists of vacation attractions.

Where we choose to spend our vacation time says a lot about what we value.  Unfortunately, many inspiring and iconic parks and their managers can’t quite keep up.

Though cities may benefit from the new money generated by these events the new revenue is often offset by both the direct and indirect costs of staging them.  It’s a fine balance, protecting the natural appeal of parks while hosting visitors whose expenditures can support park operations and capital improvements. The challenge for cities though is recognizing and managing all of the direct and indirect costs of these events to assure that local users find real benefit the rest of the season.

Limited direct revenue streams return to the City as a result of special events. Typically for a park, there are permit fees – which range from simple calculations to more complicated calculations based on security, custodial, technical, and restorative services as well as event type and expected participation.  In addition, some cities charge for direct costs and repairs that are incurred as a result of the event.

We all recognize that useful revenue can be generated by these large events, but this is a complicated problem. Fixing it means finding a solution that likely means some compromise but it also means being smarter about what the park needs – better policies regarding the type, frequency, duration and quality factors for these events that allows for full site restoration.

Some of their recommendations around event management include a focus on how to manage events more proactively; facilitate the permitting process; charge fees and recover costs for use of these public areas.

Key to their recommendations is better cost management and recovery: What services are provided? Who benefits? What is the cost of providing these services?  “While different cost management systems may include different components, the indispensable element is an overall understanding of the interrelationship between activities and costs as well as the ability to manage these cost relationships to an organization’s advantage.”

Park managers owe it to the public to be fully engaged in overseeing these events and transparent about the cost-benefit calculation of such mass, ticketed events.

There is also a need for education regarding how an event can impact the park.  Challenges exist when trying to determine tree and turf damage: damage to trees can take 6-8 years for the tree to show impact; turf challenges are year round – before and after events.  The Central Park Conservancy has developed a set of six horticultural practices to maintain healthy, attractive turf under the most challenging park conditions and now they’re trying to help others adopt them.

If all else fails though, consider moving your music festivals into your old city cemeteries, following an idea from Atlanta.  Tunes from the Tombs, Historic Oakland Cemetery’s annual summer music festival brings music to the city’s most unique performance venue. Less than a mile from the heart of downtown Atlanta, this garden cemetery, at 48 acres, is where an estimated 70,000 quiet and peaceful souls are interred, untroubled by the music or the crowds.