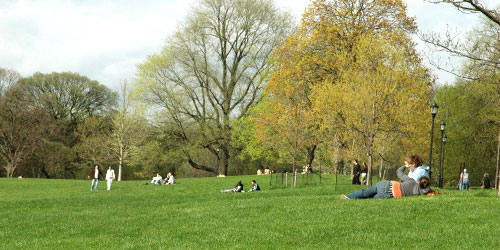 Most stakeholders in private public partnerships for parks agree that a good relationship – based on trust, competence and a shared vision – is the foundation for good collaboration toward realizing shared goals. The key part of collaboration is that it requires a close look at the behavior and strengths of both partners – generally through sharing knowledge, learning and building consensus. The collaboration comes in when the experience of both partners can be leveraged, combined and capitalized to enable a stronger project or program effort.

The park partnerships that are successful make it look easy. But collaboration requires good leadership – a kind of team leadership – to work. I caught up recently with Tupper Thomas, former President of the Prospect Park Alliance and Administrator of Prospect Park in Brooklyn, and Meg Cheever, current President and CEO of Pittsburgh Parks Conservancy to ask them about collaboration and its role in making park partnerships work. This blog is part 1 of 2 which describes our conversations.

The Prospect Park Alliance began its work in the late 1980s. The Pittsburgh Park Conservancy came later, beginning its work in 1998, building on the work of the Alliance and others who had broken ground on a new model of governance for parks. Both organizations remain hugely successful and influential and offer lessons for what works.

In partnership with the City of New York and the community, the Prospect Park Alliance restores, develops, and operates Prospect Park for the enjoyment of all by caring for the natural environment, preserving historic design, and serving the public through facilities and programs.

The Prospect Park Alliance (the Alliance) was formed in 1987 to restore the park after years of budget cuts and a deterioration of both its natural areas and usage. The goal of the alliance was to supplement the park’s basic operating budget with private funds to help carry out capital projects and community programs. Its mission statement from the go-get made it clear that the goal of the organization was to operate the park in partnership with the parks department.

The Alliance, and the huge number of donors and supporters that it has cultivated, has not only been active in restoring Prospect Park’s physical well-being, transforming it into an important cultural institution and increasing usage of the park by 300% – it has become one of the model partnerships in the nation that many new organizations look to when setting up their own park partnerships.

Tupper Thomas was hired by the city in 1980 with the assumption she would work to create the Alliance. Although the Alliance was ready to go by 1985 the mayor held up the process because he was concerned it would be too powerful in Brooklyn. By 1987 PPA leadership had convinced the mayor to support it and announce the formation of Prospect Park Alliance with Tupper Thomas as the park administrator and the head of the conservancy.

The Alliance is the partnership between the private sector and the city of NY that was integrated under Tupper’s leadership as the Prospect Park Administrator (salary paid by city) and the President of the Conservancy – one leader, two hats.

The Alliance board does not make policy regarding park rules, operations etc. That is the Parks Department responsibility. The city and Alliance divide park operations 50/50. The parks department provides the majority of basic services; the Alliance does additional work such as arboriculture, providing zone managers and a natural resources crew. 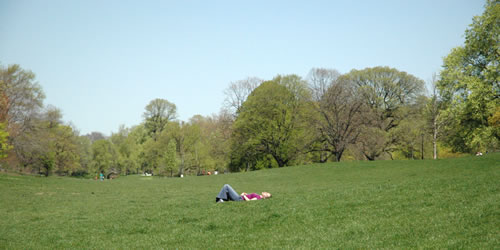 Tupper describes the beginning of the partnership: “The city would put up some capital dollars, lead a public review of the project, do the design work and then we would find the remaining capital funds to get the restoration complete. We focused our efforts on raising money for maintenance and some restoration. And later, took over the programming. In the case of the woodlands restoration, twelve million dollars went into the project which took nearly 10 years. But then the Alliance committed raising the money to maintain the natural areas – not a capital budget but augmenting the maintenance budget.”

According to Tupper, the relationship with the city is all about, “…equal power and comfort with the structure. That’s why it’s been quite successful. Having a hand in both camps wasn’t easy but it works well for the public.”

In early 1997, Meg Cheever left her job as publisher of Pittsburgh magazine to lead a start-up venture to restore the city of Pittsburgh’s parks. In 1998, the Parks Conservancy entered into a public-private partnership with the city of Pittsburgh, working together to restore the city’s four regional parks: Frick, Highland, Riverview and Schenley. Since then, the Parks Conservancy has raised more than $60 million toward park improvements, and has recently expanded into other city parks as time and resources permit. Their mission includes restoring and supporting the whole park system in Pittsburgh:

Our mission is to improve quality of life for the people of Pittsburgh by restoring the park system to excellence in partnership with the City. Our vision is wide appreciation and enjoyment of a sustainable park system whose landscapes, facilities and programming set world standards of excellence.

“We started off with a goal to raise money and help with capital projects. Pretty soon after that we realized that maintenance was important and we probably needed to get involved with that, too,” recalls Meg.

But the context in Pittsburgh for a public private partnership was different than in New York or other places. Thirty-five years ago the bottom fell out of their economy. Following the 1981–1982 recession the mills laid off 150,000 workers. The steel mills began to shut down and cause a ripple effect, as railroads, mines, and other factories across the region lost business and closed. Despite the economic turmoil, civic improvements continued as many sought to revitalize the city using historic preservation funded with private as well as public dollars.

Pittsburgh’s status as an industrial and banking center until the 1980s gave the city and the region a number of internationally-regarded museums, parks, libraries and cultural institutions. The people of Pittsburgh had come to expect quality in their public places. “There’s a different mindset in Pittsburgh. People in the city are used to government only being able to do so much. And people care about the parks and less about who does it.”

Meg says that the Conservancy took inspiration from Prospect Park and Tupper’s goal of blending the workforce of the city with the nonprofit under one mantra – “We work for the park.” In both cases the two leaders agreed that the people who came to work in their parks were there because they loved the parks. The team approach built on the shared vision of what the parks could be.

In Prospect Park, teams of city and Alliance staff were combined from the start. The organization chart showed the Parks Commissioner and the Alliance Board Chair at the top and showed shared leadership all the way down. According to Tupper, “We integrated the staff of both organizations who worked in the park. New hires came with money from either organization depending on who had it. Everybody worked as one team.”

In recalling the early years of building a collaborative partnership Tupper says, “In the beginning there were issues. We went through lots of team-building to get people working with each other better. We put people in each other’s offices. Those who worked there really loved the park – they all had that in common. And city people began to see how the private side could help with getting resources.”

In Pittsburgh, the Conservancy’s contract with the City was, and is, deceptively simple. The real work of defining how the partnership works is in the detail of the separate agreements that get negotiated for every project they work on together. Based on those more detailed work plans the city and Conservancy team meet at least on a quarterly basis for oversight meetings.

“In Schenley Plaza for example,” Meg says, “there is one key person from the city who knows what they need to be doing and he works with us. His work and ours is outlined in the lease for the plaza. If there is something unusual that comes up, we discuss it. The project agreement works pretty well. The same is true for Mellon Square – there is a lengthy agreement that spells out a protocol.”

Both leaders created an environment where the focus was on the park. “Lots of city staff wanted to stay in Prospect Park. The culture kept people because they wanted to be there.”

Recently a new contract was signed between the Prospect Park Alliance and the city of New York. It basically says they are a partner; they can raise money, do events and pretty much do what both parties had been doing for the last 26 years – it just institutionalizes the partnership and roles they have played out over all these years.

The same is true in Pittsburgh where a new contract was also recently signed. It’s still a simple document that outlines the basic framework of a working relationship with the same process of negotiating a project agreement for each capital project that they do.

After 26 years in New York and 15 years in Pittsburgh, both partnerships were strong enough to leave the basic tenets of their contracts the same. So, what has changed? I’ll report on Part 2 of my interviews with Tupper Thomas and Meg Cheever next week.